A University of Aberdeen academic has contributed to new resources to help school pupils understand the impact of the First World War.

Neil McLennan, a senior lecturer in the School of Education, is among the experts who have helped Poppy Scotland to develop new education packs.

Mr McLennan, a senior lecturer in education at the University of Aberdeen is a former history teacher and has led an initiative to create a new and lasting war to reflect on the war through music called #iPlay4Peace.

He project managed the first set of school resources created by Poppy Scotland to enhance learning on Remembrance in 2010 and said it was great to be involved again as learning moves on from the centenary of the end of the First World War.

It is really important that the next generation continue to learn the lessons of World War One but this is more than simply teaching them about the conflict and cooperation.

The Poppy Scotland learning initiative is fantastic because its remit goes much deeper than that. Teachers and pupils are guided through the experience of life in the trenches; military tactics and the technology of war but the resources also focus on commemoration and remembrance.

My involvement with the iPlay4Peace initiative has shown how important it is that we continue to find ways to engage all generations with this important element of our past.

In the run-up to Remembrance Sunday Mr McLennan visited Lathallan School near Johnshaven, Aberdeenshire, where he worked with teachers and children using the resources. 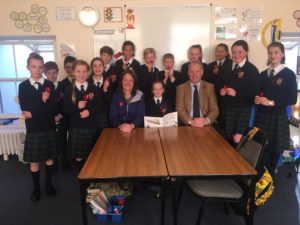 It was fantastic to see the education pack in use and how well the pupils responded to it,

Working with academics to bring the latest research and high quality learning to schools is essential. We are delighted to have worked with University of Aberdeen and Abertay University to refresh our Poppyscotland Learning resources.

Bringing in Neil McLennan’s research on shell-shock, the war poets and commemoration ensures students across Scotland are well equipped to learn about the importance of Remembrance in the future. Neil also made a significant contribution to our recently launched Far, Far from Ypres Project.