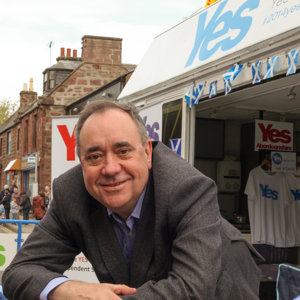 Former First Minister of Scotland, Alex Salmond MSP MP has been recognised as the latest recipient of the Sabino Arana award from the Basque Country.

Mr Salmond was being honoured for his “constitutional campaign for Scottish independence” by the Sabina Arana Foundation at the Arriaga Theatre in Bilbao this evening (31 January).

In a previous statement, the Foundation said that it had selected Mr. Salmond for his “leadership in a democratic process and in dialogue that was reflected in the Scottish referendum” and for providing “a channel for the free expression of the will of the Scots and their legitimate democratic aspirations”.

The 2016 edition of the Sabino Arana award ceremony, now in its 151st year, selected six winners from a list of 70 candidates. The award is granted to those who have made a contribution to culture, peace and social justice in the Basque Country and beyond. Past winners include Bishop Juan Maria Uriarte, international pianist Joaquín Achucarro and the New York Fire Service following the 9/11 attacks.

History is moving with the stateless nations of Europe. The current states have been exposed as hapless in their attempts to grapple with the big issues, which urgently require European solidarity such as the enforcement of climate change targets, the refugee crisis and European economic recovery.

In contrast our progressive forces see the importance of and embrace European co-operation where we should, combined with autonomy where we can establish it. In this regard, both Scotland and the Basque Country have made enormous strides in the last half century.

In the 60s, the Basque were still languishing under a fascist dictatorship while the SNP had still to elect its first member of parliament in the modern era. Now the SNP dominates Scottish politics, while the Basque National Party have been in power in this autonomous region for decades.

We represent proud nations but also canny ones. The times are coming which will allow Basque and Scottish aspirations to be met. For example: the current difficulties of London and Madrid on Europe and on forming a government are huge issues, but also represent possibilities for Scotland and the Basque Country.

Our peaceful, civic, inclusive national movements are the ones which can inspire the new generation of Scottish and Basque Europeans who seek nothing more, but nothing less, than equality with other nations in our common European home.