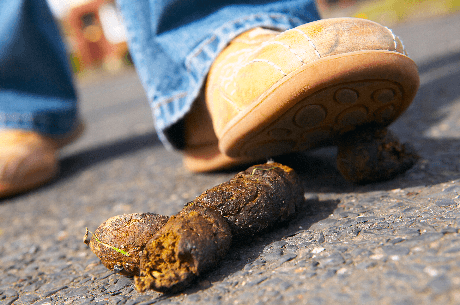 After the news that the cost of a fixed penalty notice for dog fouling was going up to £80 there was a huge amount of discussion over on the My Turriff Facebook page about dog fouling. People were saying that more dog owners need to be fined for not picking up after their dogs around Turriff.

You don’t have to walk very far around Turriff, or the Haughs, to see where dogs have been and their owners haven’t picked up after them yet I’ve never heard of anyone in Turriff being fined for dog fouling, and looking at the Facebook coments neither could anyone else.

The trouble is the lack of enforcement and availability of evidence. Very few fines given.

According the the Aberdeenshire Council dog fouling page

Aberdeenshire Council’s authorised officers have been active in enforcing the provisions of this legislation and have served a number of fixed penalty notices.

Officers routinely carry out enforcement patrols in Aberdeenshire, and any person found committing an offence is issued with a fixed penalty notice

The council, which has three dog wardens to cover the whole shire, say they are active in enforcing legislation and have issued a number of Fixed Penalty Notices (FPN). This seems to fly in the face of what people were saying on Facebook.

I did some research to see how big the problem was in Aberdeenshire and found a Freedom Of Information request from 2012, asking Aberdeenshire Council about how many complaints they had received about dog dirt over a number of years which was answered with:

So in the past four years, Aberdeenshire Council have managed to issue just 16 FPN in response to 872 complaints.

Many of the complaints we receive are of a general nature, simply referring to a problem area rather than identifying an owner or dog, which would make it easier to take action against an individual. Councillor David Aitchison

So issue of a FPN seems to be based on evidence from members of the public rather than council investigation, and members of the public may well be reluctant to come forward as a witness to provide the required evidence. You would hope that if there were a number of complaints about a given area that the council could deploy a dog warden or similar in to the area for a few days. This would allow them to educate dog owners and potentially catch people who don’t pick up in-line with their approved strategy.

Areas which are particularly prone to fouling will be targeted for investigation on a prioritised basis, provided sufficient evidence and information is available to enable effective use of limited resources. Aberdeenshire Council’s approved Dog Fouling Strategy 2013

Until June 2013 only the Council’s 3 Dog Wardens were authorised to issue Fixed Penalty Notices. However on the 20th June 2013 the Council approved the Dog Fouling Strategy. Under the strategy an additional 30 Officers in Environmental Health and Waste Management Services were formally authorised to issue Fixed Penalty Notices and training on legal references and enforcement procedures took place.

So since June 2013 there are over 30 people across the shire who have been trained to issue FPNs for dog fouling, yet still it is a problem and hardly any FPNs are issued. I think it is fair to say that the council Dog Fouling Strategy isn’t working despite the additional resources being made available to tackle the problem. I wonder how many of these extra officers who have been trained to issue FPNs actually have the relevant paperwork with them during the working day?

Last January Aberdeenshire Council launched the Green Dog Walkers Scheme to promote responsible dog walking and to get people to remind other dog walkers to pick up after their dogs. If the problem with dog fouling is enforcement because members of the public don’t want or have the time to come forward as witnesses, asking them to

become an ambassador for good practice and encourage others to only leave paw prints behind them. Cllr Allison Grant (West Garioch)

is hardly going to change things.

Although additional officers were authorised to serve Fixed Penalty Notices, it remains very difficult to gather the necessary evidence, especially since a lot of fouling takes place during the hours of darkness.

At present we place more emphasis on promoting responsible dog ownership through our Green Dog Walking campaign. This has been rolled out through community councils and has seen substantial take up, contributing to a drop in complaints from around 250 in 2014 to 160 last year.

Many of the complaints we receive are of a general nature, simply referring to a problem area rather than identifying an owner or dog, which would make it easier to take action against an individual.

A report for councillors on the issue of dog fouling, including details of the Green Dog Walking scheme, is currently being prepared by officers.

Cllr Aitchison seems to think that there has been a drop in complaints so therefore things are improving.

Sadly, I think some of the reduced number of complaints could be to do with the dog fouling reporting form not being a secure form and depending on the security preferences in your browser the form may not display.

I’m not going to go in to internet security here but in a nutshell, unsecured forms are bad.

Given that there are over 30 council officers trained to issue Fixed Penalty Notices, maybe it would be an idea to deploy them to the problem areas to