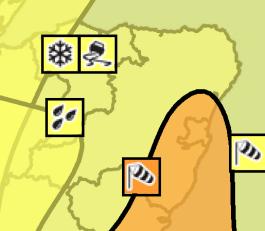 The Met Office have issued a number of weather warnings for the North East of Scotland for Thursday night and Friday as Storm Gertrude heads in off the Atlantic.

An Amber warning for wind has been issued from 3am until 10am on Friday. The warning covers Aberdeen city and north towards Oldmeldrum

West to southwesterly gales are expected to develop widely across Scotland, Northern Ireland and parts of northern England early on Friday. Winds are expected to widely gust 60-70 mph, possibly up to 80 mph along exposed coasts and over hills.

Be prepared for the likelihood of difficult driving conditions and disruption to travel, such as cancellation to ferry services and bridge closures. Some structural damage is also possible, as well as disruption to power supplies. Heavy rain and surface water will be additional hazards in places.

Winds will moderate from the west later on Friday morning.

A Yellow warning for rain has been issued from 3pm Thursday until 12pm Friday covering all of Scotland.

Rain is expected to spread from the west during Thursday, gradually turning heavier and more persistent. The heaviest rainfall will be over high ground, initially across western Scotland, then developing across northwest England and Wales during Thursday afternoon and evening. Drier conditions, albeit with some showers, are expected to reach Scotland late Friday morning, with the rain expected to clear northwest England and north Wales by midday.

Be aware of the potential for further localised flooding and disruption to travel.

This is an update to extend the warning further south into north Wales, although lower impacts are likely here than further north across Scotland. The expiry time has also been brought forward.

West to southwesterly gales are expected to develop widely across Scotland, Northern Ireland, northern England and parts of north Wales during early Friday. The strongest winds are most likely to affect the far north of Scotland, particularly the Northern Isles, and here gusts of 90 mph are possible. Elsewhere, winds are expected to widely gust 60 mph and possibly 70-80 mph in exposed locations and also locally inland as a squally cold front moves east during the morning, especially across western Scotland, Northern Ireland and northern England.

Be aware of the potential for difficult driving conditions and disruption to travel and power supplies. Across the far north of Scotland there is the likelihood of higher levels of disruption.

Be aware of disruption to travel, possible wind damage and the inevitable flooding.

Visit the Met Office website for the latest weather warnings.