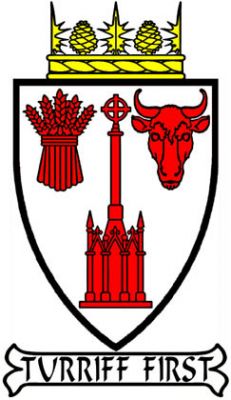 The Chair welcomed all to the meeting.

b) Apologies
Apologies had been received from Cllr Robertson, D Capel and D Park.

Undetected crimes recorded include 2 thefts, 1 petty assault and 2 unrelated crimes which are to be detected shortly. Because of proactive policing and detecting crime these figures appear higher than the last two months.

It was reported that Police had joined the Licensing Standard Office in carrying out license checks in all Turriff pubs. This was a success and allowed the Police to speak with new and existing pub owners/managers and promote ‘pub watch’ initiative.

The Police advised all of the community to be vigilant in what they place onto social media, especially if they promote that their house and valuables are unattended.

Cllr Norrie advised that there has been several reports of anti-social parking around the sports centre, residential area near the caravan park and the surrounding businesses. Now that there is no longer a tax disc displayed on motor vehicles Cllr Norrie enquired if the Police can check vehicles whilst on patrol for valid paperwork. It was confirmed that the validity of a vehicles paperwork can be checked by providing registration plate and the Police can check the VRM documentation is in place.

Following the closure of the Four Seasons Care Home AS advised this appears to be new congregational area for anti-social behaviour. AS advised that this area is not Council property and as it is not yet boarded up enquired if the Police were aware of any issues. PC Riddell confirmed that they are aware of this area and patrols have been carried outregularly.

In addition to the above, PC Riddell confirmed that patrols are regularly carried out at the carpark opposite Markethill Academy, the Industrial Estate and a regular loop is carried out to the target areas.

PC Riddell confirmed that in the run up to the festive celebrations, provisions have been made to ensure that Turriff is suitably manned, especially on ‘black eye Friday’ where support from Ellon Police has been confirmed.

3. Visitors Mr Watson (Resident)
Mr Watson was welcomed to the meeting. As a local resident he enquired about the works being carried out to the carpark at the Haughs. He questioned why the carpark works were being out when the skate park has not had attention since it was closed. In addition questioning the astro turf condition and that at present these two facilities, primarily used by the children of Turriff, are in disrepair.

RL was happy to answer the points raised:-

The residents of Turriff requested that the carpark at the Haugh was reviewed especially to accommodate May Day parking. This request was made over 2 years ago to the Council through the Community Council.

The Astro Turf had its first treatment carried out over 2 weeks ago, the community council was informed that there was still 1 further treatment to be done, after this the facility will be reopened within the next couple of weeks.

Mr Watson advised the community council that a social media petition has been started in relation to the astro turf. The facility is used all season round from football teams, to youth clubs and is a vital facility for Turriff children and families.

Mr Watson brought up further matters of concern relating to dog fouling around the Haugh and posed the question of the dredging of the burn. The burn dredging would permit the clearance of debris and could assist with the algae problem on the astro turf. He questioned when this was last done.

Discussions took place in relation to the current state of the cemetery in Turriff. In particular the state of the headstones after grass cutting. RL made reference to a previous report to the Community Council from a resident; this matter had been appropriately minuted and reported to the Council. A formal reply from Aberdeenshire Council had been made stating that this was a council wide issue and was undergoing a process. RL advised that Brian Shand from Aberdeenshire Council as attending to this. It was agreed that DS would chase this up to see if there was any further developments and email Mr Watson appropriately.

4. Approval of minutes of 5 October 2015 meeting
Minutes from the previous meeting had been circulated and amendments noted as follows:

Agenda item 8 – second paragraph
“The winners of the bauble decoration competition have been selected and all 9 winners will receive vouchers from Turriff Toy Shop. The overall winner from the 9 schools will turn on the lights on the night.”

Agenda item 12 – fifth paragraph
“Cllr Duncan advised that at present there didn’t appear to be an issue with the hedge.”

Raised by JS and seconded by AS subject to above amendments.

11) Double Parking at Bowling Green Road – this seems to have ceased and no more complaints received.

12a) Wall- Delgaty Crescent/Lane area – concern was raised regarding Delgaty Lane which runs north/south between Delgaty Crescent and Delgaty Terrace, between houses 9 and 11 Delgaty Terrace. The barrier erected at the lower end of the further up path had been erected by the Council to prevent access. The garden wall is in a state of disrepair. The path was never adopted by Aberdeenshire Council because of this issue and the ownership remains with the original developer.

Aberdeenshire Council felt that closing the path for safety reasons was the best decision under the current option.

Explanation- adopted means that the Council takes on the responsibility from a developer. In a housing scheme the developer builds the roads/pavements etc but before the council takes responsibility for them they have to be done to the same standard as any council road.

12b) Beaconsfield Lane – running to St Ninians Church. There is no access for cards but this is an extremely well used route/walkway for mums with children and buggies. It is also a route used by both senior and junior schools. The lane is heavily potholed and would benefit from some remedial works. Aberdeenshire Council advised that this lane is privately owned therefore no council maintenance can take place. It was suggested that the footpath on Hillcrest Road or the adopted lane to the West of the church are good options for the use by school pupils. RL to attempt to find out who owns this path and notify them of its current state.

6. Treasurers Report
JS circulated the financial report for this month.

JS advised that there was a donation received from TSB Turriff for the Christmas Lights which was appreciated. Many thanks to TSB.

JS advised that the Town House was gearing up for a busy period and that a bank account has now been opened for the Town House, this will be run by the Turriff Town House Association and not from the Community Council.

8. Planning & Infrastructure
MR confirmed that no applications have been submitted for this period.

MR advised of an update on a take away application. An inspector is due to visit the location shortly. The legal team for the application have advised that 25% of liability expenses will be sought following appeal. Cllr Duncan advised that if the decision was upheld these costs would be covered by the Council.

9. Local Issues
Christmas Light Committee – AS advised that the Christmas light switch on was a success making £660.15 from donations on the evening. AS thanked everyone including Santa for their attendance and support.

Turriff Boating Pond – No Minutes have been received from B Shand in relation to the Haugh. RL to arrange a meeting with B Shand to discuss the Jetty and water and electrics to the shed for the new season.

Turriff Caravan Park Ltd – Nothing new to report. New sites are out to tender.

Turriff Market – There has currently been no market for 2 months. MR emailed Elaine Brown regarding the accounts and to date has had no response. Discussions took place regarding the three accounts that have been set up and used by the market and that these must be accountable and the use of these given back to those responsible and the community council involvement removed going forward. RL to contact Business Associate to establish the current situation.

Full answers to CAT 2 stage sent to the Formartine Area Manager, Mrs Brown, with a request for clarification on points raised, JS feels that a meeting would be of more benefit to allow all questions to be answered and discussions made. RL advised committee that JS and she had attended a recent Community Asset Transfer information session in Inverurie.

AGM for Turriff Town House will take place in the middle of January, JS invites all members of the public to attend and get involved in the Town House. The date of this will either be the 18th January, or 25th January – date will be confirmed in due course.

AN asked about the Heritage Society meeting that took place with Town House Assoc. JS advised that this situation is at stalemate. Heritage Society insist that they require the use of two back rooms and main room which would be locked up when not in use by them. This would restrict the use by the 45 local groups currently using the building as well as loss of income and facilities. Incorporating the Museum would mean that these small local groups would have nowhere to meet.

12. Corporate Communications
Nothing to report.

13. Any Other Competent Business

IG was contacted to advise that concern was raised about the top of Crown Street. Skidding is noticed and perhaps an anti skid tarmac could be laid?

RL asked the Councillors about current tarmac work taking place on the pavements on the Banff Road.

RL asked about the pavements on Balmellie Street in particular the man hole covers (co-operative side) these appear different levels and are a trip hazard. The bottom of Delgaty/Highfield walk where the water builds up. Hatton Road/Easterfield Road at the Hospital.

AN advised that Infrastructure Services Committee – Council Website advises the rework of winter maintenance. To cut costs they will do what is needed and not extras ie. Clear one pavement not two.

AM advised that the yellow sand bin lids in Meadowview Road have been damaged, one at the bus stop at the corner of Meadowview Avenue and the one down from Meadowview Place on Meadowview Road. She enquired as too who is responsible for their repair.

13. Dates of future meetings
It was agreed that the next meeting would take place on:

Subsequent meetings are to be held on

You can download a PDF of the minutes using the link below.