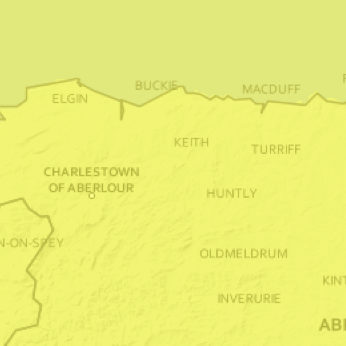 The current warning is

A band of rain, sleet and snow will move south across northern and eastern Scotland later on Friday, then into the Borders and northeast England on Friday night. The snow will mainly affect high ground at first but will fall to lower levels on Friday night. 1-4 cm is likely at some lower levels but with 5-10 cm above 150 m, with drifting in the strong to gale force north or northwesterly winds. Indeed severe gales with gusts to 60 mph could bring a short period of blizzard conditions to the highest routes later Friday evening and overnight. The more persistent snow and strong winds will have cleared by Saturday morning but ice will be an additional hazard by then, particularly for higher level routes.

Please be aware of the likelihood of some difficult driving conditions and some travel disruption.

The Yellow Snow warning is currently in place from 4pm this afternoon until 10 am on Saturday morning. The Met Office have the likelihood of snow as high but the disruption level is comparatively low, although this may change during the day.

The Met Office Chief Forecaster said of the warning

A major (but temporary) change of weather type will see the winds swing into a more northerly direction, pulling down much colder air across the whole of Britain and western Europe, after what has been an exceptionally mild first half of November. Wintry showers will spread to many northern areas in particular and night frosts will become much more widespread.

Within this northerly flow, a small but quite active low pressure system is expected to develop and transfer south bringing more widespread wintry conditions and strong to gale force winds. At present details of both the snow amounts and wind strengths are uncertain, and so expect updates to the warning.

Don’t forget to check that you are Ready For Winter.