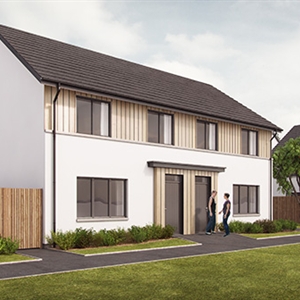 The Scottish Government has announced it has exceeded its five-year target of delivering 30,000 affordable homes by March 2016.

As part of the target, the Scottish Government pledged to deliver 20,000 social rented homes including 5,000 council homes, both of which have also been exceeded.

Speaking ahead of a housing debate in the Scottish Parliament, Social Justice Secretary Alex Neil said

I am delighted that we have now met our commitment to deliver 30,000 affordable homes ahead of our target date of March 2016.

We believe in a Fairer Scotland for all and good quality affordable housing is central to making that a reality.

Despite a challenging financial environment, we have invested in excess of £1.7 billion to meet the target, reintroduced council house building and protected existing housing stock through abolishing the right to buy.

We have worked hard with the housing sector to deliver these homes as well as develop innovative funding initiatives, such as government guarantees, loans, grant recycling and new sources of private funding, to help both buyers and developers.

While the Scottish Government has reportedly beaten its own targets, according to Shelter Scotland there is still a requirement to build 12,000 new affordable homes in Scotland each year for five years to address the backlog of people needing homes. In March 2015 there were 150,000 people on local authority housing waiting lists.  The SNP have committed to building 50,000 affordable homes in Scotland over the lifetime of the next parliament pending the outcome of the May 2016 elections.