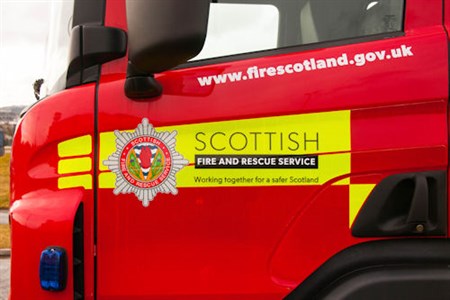 One person died and a number of others were treated for smoke inhalation at a fire in a block of flats in the Newtown Drive area of Macduff.

Crews from Macduff, Banff, Portsoy, Abercherder and Turriff all attended the blaze along with Police Scotland and Scottish Ambulance Service.

It has been reported locally that the roof and the top floor of the building collapsed during the fire.

The cause of the fire which is thought to have started just after midnight is not yet known, a spokesperson from Scottish Fire and Rescue Service said an investigation will be carried out today.

SFRS Group Manager Davie Meldrum, who was at the scene, said

The crews worked very hard throughout the night and rescued a further five people from the block. One of those five was rescued by ladder from a third floor window and four others were walked to safety.

There were around 15 flats in the block and the remainder of residents managed to self-evacuate. The fire was brought under control by 3.57am this morning. A joint investigation into the cause will now take place between SFRS and Police Scotland.

Over the coming days we will be carrying out a post incident response to this fire and visiting residents in the surrounding area to provide them with fire safety advice.

Roads around the scene of the fire have been closed and will remain closed while the investigaton takes place. Local diversions will be in place.

The last appliance left the scene this morning at 7.15am.