Over £380 was raised by Turriff and District Community Council when they held a community coffee morning at the British Legion on Saturday 16 August.

Rose Logan, a member of the Community Council was really pleased with the result saying

There will be some expenses, but considering the poor weather outside, and the fact that the Foggie Show would have drawn some people away, we are really pleased that we were able to do as well as we did. It was good also to see the Legion Hall just about full.

The money will go towards some of the projects that the Community Council works on. One in particular was the climbing frame erected recently at Hatton Road and is a very popular play site for local children. This was the brain child of Annette Stephen who has served on TDCC for many years now.

Also on My Turriff
Turriff Bank of Scotland set to close

It was the first such event that newer members of the Community Council had attended, such as Ron Farquhar Munro and Bill Moultrie.

Both worked hard and found out how busy it can get in the kitchen making coffee and tea, and just as importantly washing and cleaning the cups and saucers!.

Ben Ewen, the Chairman of TDCC managed the raffle and at the end he expressed thanks for all who helped out in any way, as well as thanking the generosity of the Committee of the Royal British Legion Scotland, Turriff Branch, for allowing the use of the hall. 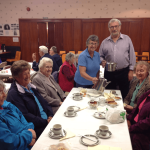 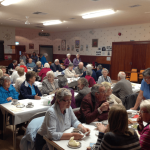 Great turn out for the coffee morning

This business supports My Turriff

Get My Turriff delivered to your inbox