The annual Turriff May Day celebrations were hailed as a great success again by First Minister Alex Salmond who visited the town on Monday .

After an overcast start, the weather improved and the crowds flocked along Main Street, High Street, School Hill & Balmellie Street all of which had been closed off  to traffic for the day. Mr Salmond who spent a couple of hours talking to visitors and stall holders in the town on Monday said

I was delighted to attend the Turra May Day festivities today. It was a terrific day out and I would like to congratulate the organisers, for what was truly a fun day for all the family. The Turriff May Day events have a long track record of success in promoting the community and in raising money for good causes like Cancer Research and Zimbabwean Orphans. This year’s activities certainly lived up to their billing.

I was glad to get the opportunity to chat with so many folk out and about and to officially open the Yes Trailer. It may not rack up quite as many miles as I will in the coming months on the campaign trail, but I hope it can prove a focal point in delivering our positive message for Scotland’s future. 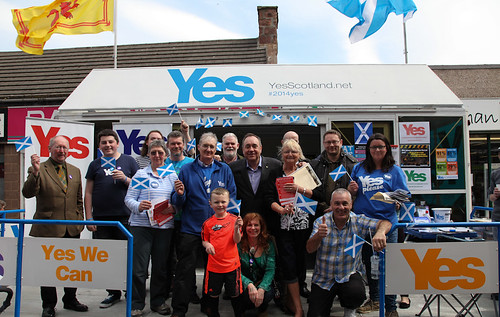 This business supports My Turriff

Get My Turriff delivered to your inbox