The Queen’s Baton Relay for the 2014 Commonwealth Games will be visiting Turriff as part of its route around Scotland.

The baton, which  is currently in the Caribbean, will arrive in Scotland on 14 June after visiting the rest of the British Isles. It will spend 40 days visiting all parts of the country and each local authority area before arriving in Glasgow on 23 July for the start of the games.

The baton holds a message from the Queen which she will read at the opening of the Commonwealth Games after the baton has been delivered back to her. The baton will travel 4000 kilometres, pass through the hands of 4000 baton bearers and visit 400 towns, villages & cities in its 40 day tour of Scotland showcasing the nation’s most-iconic landmarks and culture. 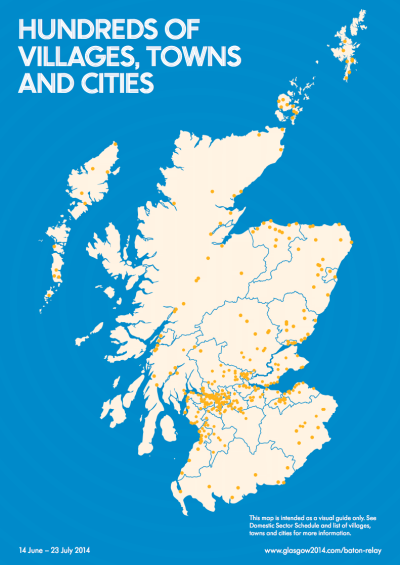 World-famous sights such as the Forth Bridge and Loch Ness feature on the baton’s journey, as well as The Kelpies, Falkirk’s 30 metre-high dazzling horse head sculptures. Scotland’s rich heritage takes centre stage when the baton visits Skara Brae in the Orkney Isles and travels along the Glenfinnan Viaduct in the Highlands.

The Queen’s Baton Relay is the ultimate symbol of the Commonwealth Games and its arrival in Scotland will be an important signal to both the athletes and the public that the Games are just around the corner.

The baton’s journey through the country is the ideal opportunity for people to celebrate community sport and show support for their local athletes selected to represent Team Scotland at Glasgow 2014. We hope everyone the length and breadth of the country will get behind the team and play their part in what is going to be an amazing home Games!

The Queen’s Baton Relay is a once-in-a-lifetime opportunity for people across Scotland to celebrate what’s extraordinary and unique about their communities, and honour those locals who make a difference to others. The baton is visiting hundreds of villages, towns and cities, with thousands taking part in the relay, and many more attending the vast programme of sports and cultural events along the route. With less than three months to go until the baton comes home to Scotland, the momentum is building up for the biggest festival of sport and culture this nation has ever hosted.

You can download the full Queen’s Baton Relay fact sheet for the Final Straight here.