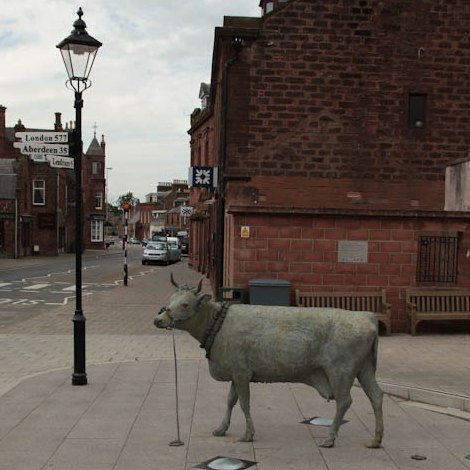 Although it was windy the weather was kind, the skies were blue and the rain held off on Saturday as people from Turriff and further afield came in to the town to celebrate the centenary of the Turra Coo.

Turriff’s sheriff George Keith was ordered to go to the farm to seize goods to cover the un paid tax, a sum of £22. Seizing goods was made difficult for George Keith because none of the local men, who were also opposed to the new tax, would assist him in removing goods. The only thing that could be moved without any help was a dairy cow, which was lead back to Turriff to be auctioned. The government attempted to auction the cow in the town square but the move caused a near riot.

When the cow was brought in to the town square to be auctioned angry farmers and their supporters pelted police with rotten fruit and soot. The cow was eventually sold to farmer Alexander Craig for £27, but the community grouped together, led by Bryony Miller the wife of Robert Patersons’ farm hand, and purchased the animal back for Lendrum Farm. An updated and reprinted version of the Turra Coo book written by the late Professor Sandy Fenton was launched at the Auld Post Office Museum as part of centenary celbrations. The reprinted book includes the story of the Turra Coo sculpture.

A commemorative plate celebrating the centenary was also on sale at the market and is also available to buy from Scotch Corner.

Turriff and District Pipe band marched to Coo Corner and played the Turra Coo a piece written by Bill Hepburn Snr especially for the unveiling of the Turra Coo sculpture three years ago. First Minister Alex Salmond who was not able to be at the celebrations said of the centenary,

Three years ago I was delighted to participate in the unveiling of a commemorative sculpture of the Turra Coo on ‘coo corner’. Despite the years gone by the story of this cow still rings true today.

The rural economy of the North East of Scotland seems a mystery to those in Westminster, and unfortunately that has not changed over the last 100 years.”

This cow represents a fight against injustice, especially injustice by those who seek to apply one rule to all without understanding the geographical consequences. The iniquity of the bedroom tax in Scotland is a case in point for modern times.

I hope that this story that will continue to be told in Turriff and the North East for at least another 100 years.