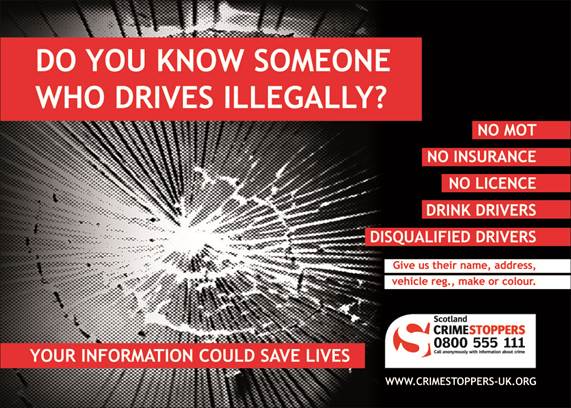 The independent charity Crimestoppers is looking to drive up information on those breaking the law on roads across Scotland.  In a campaign launched today  the  charity wants the publics help to clamp down on illegal drivers who are breaking the law and endangering the lives of law abiding citizens.

The project, supported by Police Scotland, is looking to steer criminal drivers off-road with the support of the public’s information.

Whether it be drivers who are disqualified still making their journey to work, individuals thinking they can get away with that all important insurance, or those who have been to the pub, had one too many, and think it’s safe to drive home – Crimestoppers wants to know about them.

Back in August, Police Scotland ran a three day initiative to clamp down on uninsured and unlicensed drivers, and found almost 200 motorists failed to have the correct documentation to be behind the wheel.

In Scotland alone, 9673 injury accidents were reported last year. In the twelve month period from 1 April 2012, 6359 people were detected driving under the influence of alcohol or drugs.

In addition, 18285 people were found to be driving while disqualified or without insurance – this is a figure that needs to come down, and the public can help and could be entitled to a reward of up to £1,000 if their information leads to an arrest and charge. 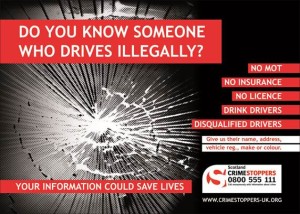 It’s horrifying to think that so many people are behind the wheel when they shouldn’t be, whether that is driving under the influence of drink or drugs or without insurance.

Vehicles in the wrong hands are effectively killing machines, and I would urge anyone who knows of someone who is behind the wheel when they shouldn’t be to contact Crimestoppers anonymously and give us the details of the person and vehicle that is breaking the law. I can assure you, we will never reveal your identity.

We fully support Crimestopper’s crackdown on selfish drivers who have no right to be behind the wheel and are a danger to themselves and other road users.

We also urge the public to play their part by reporting anyone who continually flouts the law in this way. By using Crimestoppers they can do so in the knowledge that their information remains anonymous, and they are making the roads safer for everyone.

Chief Inspector Stewart Carle of Police Scotland’s Road Policing Branch welcomes the support of Crimestoppers in raising public awareness about illegal driving and how the public can help tackle this selfish behaviour and make our roads safer. He said:

Drink/drug driving is extremely dangerous. It cannot and must not be tolerated. There is simply no excuse to knowingly allow a family member, friend or colleague to get behind the wheel if they are under the influence of drink or drugs.

If, for your own safety, you feel you can’t intervene, then you must call the police or Crimestoppers to alert them to the danger before someone is seriously injured or killed. Equally, if you see a vehicle being driven erratically or dangerously then make that call.

Illegal driving also includes drivers banned by the courts from the roads due to their behaviour. To continue driving when disqualified is to defy the court and say to wider society that the rules don’t apply to you. Again, if you suspect someone is driving whilst disqualified or without insurance cover, then again, make that call.

Road safety is everyone’s responsibility and starts with courteous behaviour and abiding by the rules of the road. If you think someone is endangering other road users, then call the police or Crimestoppers and do your bit to keep people safe.

If you have any information on someone breaking the law behind the wheel, or any other crime, please contact Crimestoppers anonymously on 0800 555 111 or through our Anonymous Online Form at www.crimestoppers-uk.org.