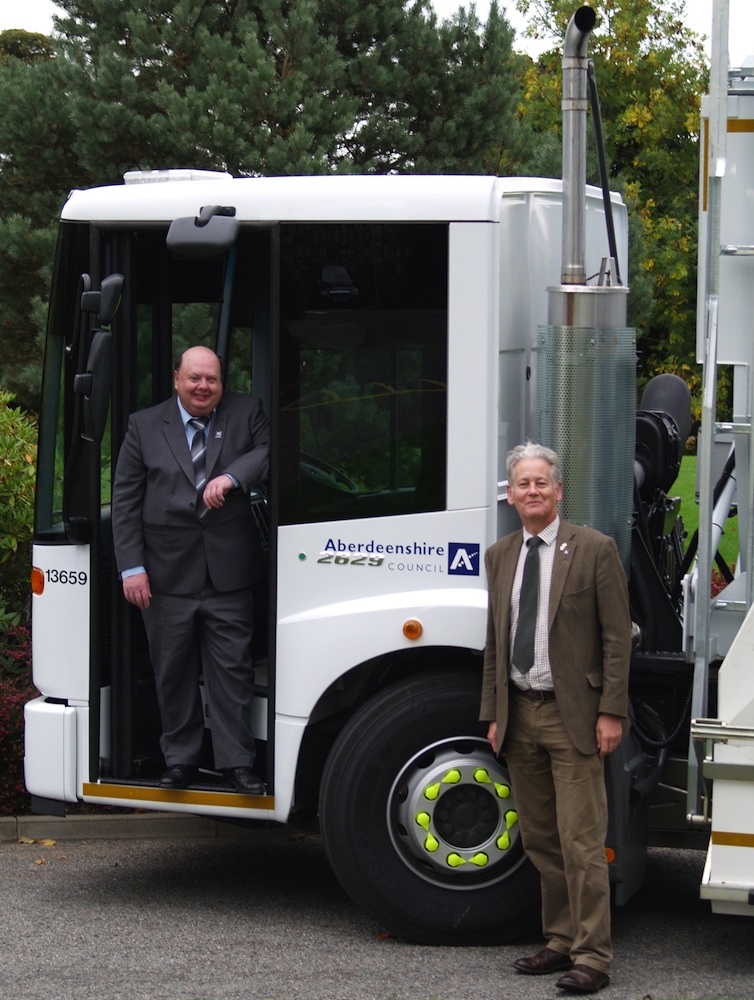 The first of a fleet of 46 new, cleaner and more efficient waste and recycling vehicles have arrived in Aberdeenshire. The new vehicles which have been purchased as part of the changes to the recycling service in the shire will help deliver improvements to recycling and waste collection from November.

The council’s Policy and Resources Committee approved a deal to purchase 46 of the £152,000 vehicles, at a total cost of £7.6 million in February. The vehicles have Mercedes chassis and bodies made by Heil in Dunfermline, Fife to accommodate the new collections. They meet Euro 5 emission standards, making them cleaner and more efficient than the previous fleet, which needed to be replaced anyway and having a fleet of a single vehicle type means all vehicles are interchangeable in the event of a breakdown and there will be a much smaller range of spare parts required. 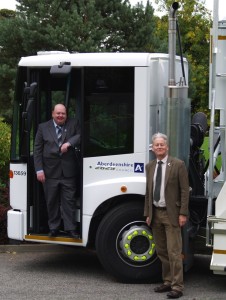 The 26 tonne vehicles have a capacity of around 8.5 tonnes, which includes a fully sealed food compartment to prevent drips or spillages with a capacity of around 1.5 tonnes. It is expected that the new vehicles can collect waste and recycling from about 500 homes before emptying the load. In urban areas the vehicles will do two to three runs a day, collecting from between 1,000 and 1,500 houses to complete their rounds.

These vehicles will replace the existing fleet, which has reached the end of its useful life. One type of vehicle will now do what three types previously did under the old arrangement: one type of vehicle was used for refuse, another for urban recycling and a third type for rural recycling.

Also on My Turriff
Violence Against Women strategy launched

In addition the the 46 vehicle fleet, four smaller vehicles have been bought to help recycling and waste teams access harder to reach areas, with particularly narrow streets for example.

This new fleet enables the council to move away from recycling boxes and collect mixed recyclables all in one bin, as well as collecting food waste at the same time, an improved service for Aberdeenshire. This is more convenient for many householders, provides a multi material recycling service to rural residents for the first time and and also allows all Aberdeenshire residents to recycle a wider range of plastic materials.

There wasn’t space in the old vehicles to collect as wide a range of materials, but as the new vehicles compact the waste, more plastics such as yoghurt pots and margarine tubs can be collected from the householder in a fuel efficient and cost effective way.Residents have asked the council to recycle a wider range of plastics and we are pleased to be able to provide this service now. We will also be able to collect brown cardboard and tetra paks at the kerbside, which wasn’t possible before.

Information providing details of the new arrangements will be sent to all households shortly before each phase of the new service is rolled out.

Extensive information on waste and recycling is also available on the council’s website.